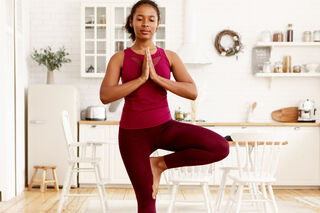 Since 1980, the prevalence of obesity in the U.S. has tripled. With more than 40 percent of Americans considered obese, it’s not surprising that losing weight is one of the most common New Year’s resolutions.

And diet options abound. Over the past four decades, public health experts and unofficial weight loss gurus have promoted all sorts of diets including low-fat, low-carb, eating grapefruits with every meal, and more.

But a new sweeping systematic review published in the open access journal iScience in September makes the case that the healthier resolution is to exercise more rather than diet.

In the review, the authors analyzed hundreds of scholarly articles on dieting, weight loss, and physical fitness to determine the healthiest strategy for people who are obese.

Instead, the authors found clear evidence that exercise is a sure-fire way for obese people to improve their overall health and well-being. Pooling together data from all of the studies, the authors found that obese people who begin exercising can lower their risk of premature death by 30 percent, even if they don’t lose any weight. On the flip side, obese people who lose weight by dieting improve their risk of premature death by about 15 percent in some studies, and less or not at all in other studies.

In fact, obese people who improve their fitness levels often have a lower risk of premature death compared to people with normal weights but are out of shape, the review finds.

Sometimes, the review finds, obese people lose weight when they start exercising; but often, a new exercise plan does not lead to weight loss. Still, the data show improved fitness often leads to a change in body composition, which has its own health benefits. That’s because exercise typically reduces visceral fat — the stored fat that wraps around our abdominal organs. Having less visceral fat reduces the risk of developing diabetes, heart disease, stroke and some types of cancer.

The take-home message: If you want to make a New Year’s resolution to improve your health, focusing on exercise is your best bet, especially if you are overweight or obese.

Horoscope 2022: What will new year bring in for you?

Different masks for different workouts as exercise evolves with covid-19

You can’t outrun your fork; but that doesn’t mean exercise can’t help you lose weight or change your diet

Exercising After 65 Can Slash Your Dementia Risk — Best Life