Share
Facebook Twitter LinkedIn Pinterest WhatsApp Telegram Viber
Shilpa Shetty indulged in all sorts of sweets as a part of her New Year binge. We know this from the sneak peek of the supper she gave on her Insta stories. The actress had recently returned from a family vacation in Mussoorie. They welcomed the New Year at their residence in Mumbai. On the first day of the year, Shilpa indulged in some motivational reading and shared a picture of a page from the book. There was an inspiring message to not fret about the problems of life, and rather simply breathe. 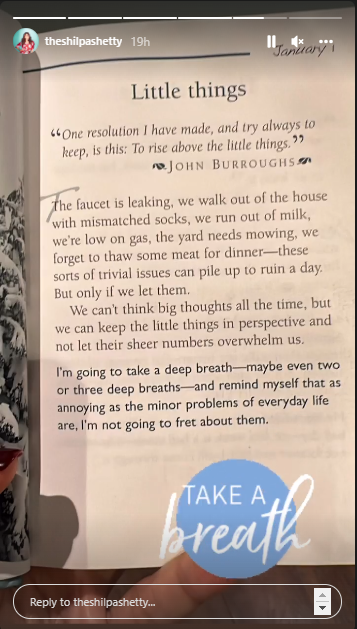 Yesterday, Shilpa had also shared a video of her pets on Instagram with the caption, “Starting the year on a playful, happy, and active note with Simba and Truffle 🤣 When life knocks you over or smacks you in the face like Simba, get up and go back at it like Truffle. #NeverGiveUp Quite motivating, must say! Happy New Year, guys! Love you!♥️😘🧿”

Earlier, Shilpa had shared several glimpses of their vacay on social media, but Raj was missing from all the posts. The family also celebrated Christmas way from the hustle and bustle of the city.

Raj Kundra has been maintaining a low profile ever since he was named the key conspirator in a case connected to production and distribution of pornographic content. He was arrested in July and walked out on bail in September. Recently Raj had issued a statement, breaking his silence over the entire controversy.

The businessman had stated, “After much contemplation, considering there are many misleading and irresponsible statements and articles floating around and my silence has been misconstrued for weakness. I would like to start by stating that I have NEVER been involved in the production and distribution of ‘pornography’ EVER in my life. This whole episode has been nothing but a witch hunt. The matter is sub judice so I can not elucidate, but I am ready to face trial and have full faith in the judiciary, where the truth will prevail. The trolling, negativity and toxic public perception has been very debilitating. To set the record straight, I do not hide my face in shame, but wish that my privacy is not intruded anymore with this continued MEDIA TRIAL. My priority has always been my family, nothing else matters at this juncture.”

On the work front, Shilpa was last seen in ‘Hungama 2’.

Drinking Habits To Avoid if You Don’t Want Visceral Fat, Say Dietitians — Eat This Not That

Shilpa Shetty tries her luck at rapping in front of Badshah and the outcome will leave you in splits; WATCH