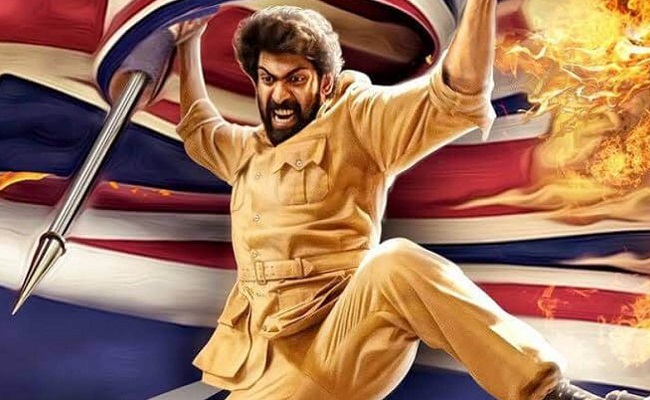 This was the film that started its shooting way back in 2016. After many hiccups the film could complete its shoot part but the differences between the lead actor and the makers gave an impression that this film was shelved long while ago.

But, the film could hit the screens today without any pre release promotion. Still, looking at the popular star cast in main roles, audiences hook on to some expectations.

Let us see how it went on.

The story starts with the news about the death of Subhash Chandrabose.

Adi (Rana Daggubati) is a London returned Indian who gets a match to marry Anandhi (Regina), the daughter of an Indian clerk (Nasser) who is loyal to the British empire.

Looking at the atrocities faced by Indians under the tyranny of the British and losing his close friend (Saptagiri), Adi joins the Indian National Army to fight against the British.

What happens to his marriage with Anandhi and how her father deals with Adi forms the rest of the story.

Rana Daggubati looked hale and healthy. He was perfectly suited to the role.

Regina is eye pleasing. Nasser and Satya Raj are ok in their characters.

Saptagiri added nothing to the drama other than filling the space as a dimwit in a lame comedy track.

No big scope is given to any one to perform. No character touches the heart.

Technically the cinematography, costumes and art department score the points. Rest of all the crafts failed miserably. The dubbing is poor. The sound treatment and the RR are unimpressive.

Dialogues are pale and the direction is a damp squib all together.

There have been many films in the backdrop of British rule in India. But none of those might be as tacky as this film.

The character of Saptagiri resembles that of Raghuveer Yadav of 1942 A Love Story.

Satya Raj’s character is apparently close to that of Anupam Kher.

Nasser’s characterization reminds us of the character played by Manohar Singh.

Certain scenes look so pitiful that even short film makers could conceive better. The wheat-lifting scene comes under this. The death scene of Saptagiri is also insipid and contrived to the core. The romantic track between Adi and Anandi is dumb.

The primary problem in the film is that it starts with Subhash Chandrabose’s death. When the narration is bad, and when the character chosen for the backdrop is already dead, then what holds the audience’s interest?

On a whole the writing goes like a stage drama with no adrenaline boosters required for cinema.

1945 ends up with no proper ending. The climax part was not shot but narrated in a voice over. The makers also might have anticipated the result of this film accurately. That’s the reason they didn’t attempt to do any pre release promotions.

Nora Fatehi tests negative for Covid-19; says, 'I am going to continue to work on getting my strength and energy back' | Hindi Movie News

Actor Shaheer Shaikh Asks Fans To Pray For His Dad, On Ventilator With COVID