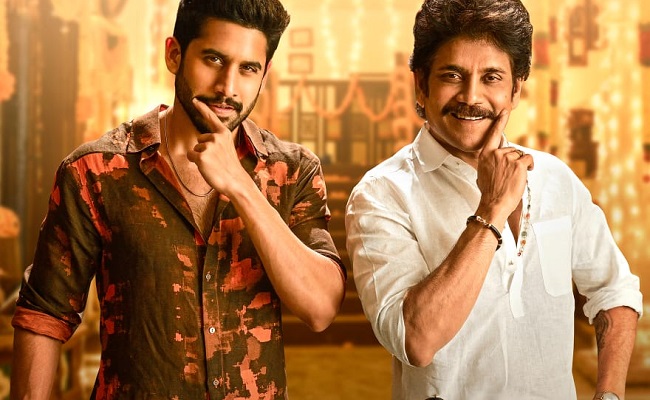 “Bangarraju” is the first big release in 2022, and also marks the combination of father-son duo Nagarjuna and Naga Chaitanya after “Manam”. The film created a lot of hype and buzz with its promotions.

Let’s find out whether it meets the expectations.

Before her death, Sattamma wanted her grandson Chinna Bangarraju to marry Nagalaxmi (Krithi Shetty). Nagalaxmi becomes president of their village, and Chinna Bangarraju frequently quarrels with her. So, on the insistence of Sattamma, the grandfather’s soul enters the body of Bangarraju Jr to help them get together.. The drama begins.

Nagarjuna lets his son Naga Chaitanya dominate the show. Nagarjuna has less screen time but gets an impactful presence. Naga Chaitanya is the real ‘hero’ of the film, and he gives a decent performance in a role that needed him to be bombastic.

Ramya Krishna lends her able support in a minor role. Krithi Shetty as a village girl Naga Lakshmi is okay. But her romantic track with Naga Chaitanya lacks effectiveness.

Faria Abdullah and Daksha Nagarkar appear in songs and make their presence felt. The comedy scenes involving Brahmaji and Vennela Kishore are outdated.

Anup Rubens has given a couple of hit songs. “Vasi Vadi Tassadiya” is catchy. The song shot on Naga Chaitanya and Faria Abdullah is an eye feast.

The other technicians have put in the very ordinary effort.

“Bangarraju” is a sequel to the 2016 film ‘Soggade Chinni Nayana’ that starred Nagarjuna and Ramya Krishna in the lead roles. The sequel also follows the same path. Not many additions have been added to the story. In fact, it is like a rehash of the same story. The grandson of Bangarraju is also a flirt.

In the original film, Bangarraju comes back in the form of a soul to help his son. He does the same, but this time to help his grandson. Even the villain (Sampath) is the same. It is like watching the new version of “Soggade Chinni Nayana”.

But the latest version is lacking such entertainment. The entire first half of the film gives a feel of a rushed product. The extended comedy track on Krithi Shetty as a village president fails to evoke laughs at all.

Nearly 20-minute of the runtime is devoted to a ‘Veeri Veeri Gummadi’ game between Naga Chaitanya and Kriti Shetty, which is supposed to be a romantic track. Many such scenes tell us that the makers have just filled the runtime with random scenes.

The film only gets its groove when Nagarjuna and Naga Chaitanya appear together in the frame. Thankfully, the film has its moments in the second half. The final portion saves the day to some extent.

Director Kalyan Krishna has not even tried to package the clichéd plot in a contemporary way. Hence, “Bangarraju” turns out to be a routine family entertainer.

We need to watch out how the festival period would help the film at the box-office.

Nora Fatehi proves she is queen of chic airport looks in ₹45k jacket and shorts: Photos and videos | Fashion Trends