Kishwar Desai’s publication, The Longest Kiss: The Life and Times of Devika Rani, has been several years in the planning and we have the pandemic-enforced suspension of normal life to thank for its timely arrival. Devika Rani has so far received scant attention from historians and biographers and Desai’s book marks a welcome departure in exploring her contribution to the Indian film industry at a time when by even appearing on the screen, a woman’s presence could – and did – invite moral outrage, a point I shall return to.

Himanshu Rai, Devika Rani’s husband and business partner at the Bombay Talkies, has already been the subject of a handful of biographies and monographs. Regrettably not all of these have been completed and the late Dileep Padgaonkar, former editor of the Times of India, had devoted considerable time to biographical research on Rai before his death in 2016.

Desai draws on a large and significant archive that she has collected over fifteen years, including copies of personal and professional correspondence and notes from interviews. Letters are invaluable because of their temporal immediacy; acting as compelling informants of events and people, they allow us to get closer to their writers in a way that later recollections often fail to do. Desai’s collection includes family records and documents related to the Bombay Talkies, many of which, following Devika Rani’s death in 1994, arrived in the hands of the Dietze family via a circuitous journey from Germany to India to Australia.

From this large volume of documents, combined with recollections from individuals and contemporary articles and ephemera, Desai has created what might be described as a dramatised biography. Her cinematic writing style – Desai is also a successful playwright – hooks the reader’s attention, and she uses her imagination to conjure scenes and interior dialogue, bringing the lives of the main protagonists into vivid relief.

Desai’s occasional reliance on secondary sources introduces a few errors into the text, specifically with regard to the Germans, and the absence of a bibliography will frustrate academic researchers, however, this book will reward anyone with a general interest in Indian film history and in particular with that of the Bombay Talkies, a studio that rapidly rose to prominence in the landscape of  India’s early sound film studios, effectively forming a triumvirate with New Theatres in Calcutta and Prabhat Studios in Pune.

Established in 1934 by Rai and Devika Rani, Bombay Talkies was an amalgam of their own ideas shaped by their experience of working in Europe, most significantly at Ufa’s studios in Berlin. By the end of 1935, the studio had released three films and counted more than 400 employees; and it was becoming a sought-after training ground for some of India’s most important actors and technicians. 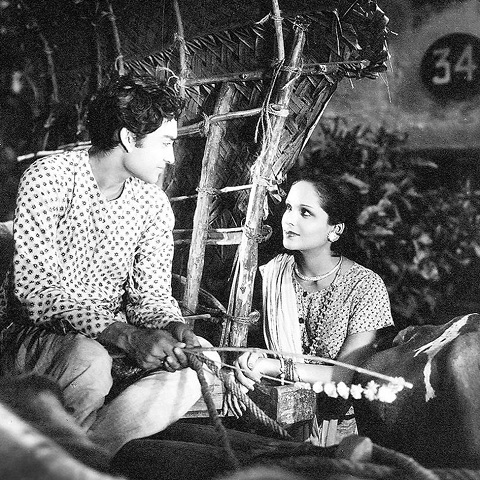 Desai expands what is known about the period during the late 1920s when Rai and Devika Rani lived and worked in Berlin, and entanglements that later took the archive to Rai’s descendants in Australia. Some of this detail correlates with documents in the Ufa archives in Berlin but Desai adds previously unreported details about the couple’s activities in Germany and how Devika Rani successfully negotiated the thorny issue of child maintenance for the daughter from Rai’s earlier relationship with Mary Hainlin.

Rai had produced and acted in three silent films directed by the German, Franz Osten, between 1925 and 1929, before eventually leaving Berlin with Devika Rani to make an Indo-British talkie in English and Hindi. This was the 1933 sound film Karma, the first dual-language film from India which was produced at Stoll Studios in London and on location in India. It was this film which began Devika Rani’s career as a leading lady – Rai had already engaged her to work behind the scenes by 1928 – and it is this film that gives the book its title and cover image, playing on the notoriety of a screen kiss which risks diluting the significance of Devika Rani’s overall contribution.

Desai’s engagement with her subject brings new information to light, some of it knocking a little shine off the golden image the Bombay Talkies strove to present of the studio and its management. In an anthology due to be released later this year, the studio’s first film architect, Karl von Spreti, reveals that internal relationships could at times be quite fiery, with much shouting and bellowing. Von Spreti worked at Malad from March 1935 until December 1937 when he returned to Germany (Desai’s suggestion that he was interned in India during the war is an oft-repeated error) and the cache of recently discovered letters that he wrote to his family in Germany provides details about the day-to-day workings of the studio.

Von Spreti’s letters also refer to Devika Rani. Describing her as “pretty as a picture”, he relates her kindness and generosity and recounts how they shared a common interest in flora and the design of the gardens at Malad. He also provides his perspective of the events surrounding her elopement with Najam-ul-Hussain. This affair, largely hidden from the world outside, caused much turmoil within the studio, fracturing relationships and further isolating Devika Rani as the person who betrayed Rai. Although she was the studio’s famous star, Desai reveals the extent of her suffering and the serious physical violence she endured from Rai, a matter she hid successfully from her studio colleagues in order to preserve her dignity as well as Rai’s reputation. One of Bombay Talkies’ ambitions was to promote filmmaking as a reputable career for women from “respectable families”. The release of their first film, Jawani Ki Hawa, illustrated just how challenging this would be. The film’s premiere was delayed and disrupted by the Parsi community which reacted furiously against the involvement of the two Homji sisters, who worked under the stage names Saraswati Devi and Chandraprabha. The anger, predominantly incited by the patriarchs of the community, raged for many days, becoming increasingly hysterical in tone, with one impassioned letter in the Bombay Chronicle appealing for understanding: “Take for instance Miss Modest Virgin going to the stage or screen as an actress. She is asked to woo one Mr. Scoundrel! And to fall in his arms and be his bride on the stage!”

The heat died down a little and the matter was resolved, not by reshooting the offending scenes as the community demanded, but by the resignation of three of the four Parsi members from the board of directors – had it included their landlord, F.E. Dinshaw, the studio’s tenure at the site in Malad would have been shaky indeed. This was the deeply patriarchal world that Devika Rani had to negotiate and it is to her credit that she managed to stay the course.

Desai succeeds in getting behind the private façade of her subject and her book adds not only to the history of Bombay Talkies but to Devika Rani’s significant achievement as business manager and India’s first major film star.

Eleanor Halsall completed her doctoral work on the Bombay Talkies at London’s School of Oriental and African Studies under the supervision of professor Rachel Dwyer. She currently works as a research associate on STUDIOTEC, an ERC-funded project examining film studios in Germany, Britain, France and Italy from 1930-1960.

Prince Harry to drop four books as part of deal worth £29million, one after Queen’s death: report

10 Books About Cryptids and Cryptozoology

Great Library Displays and How Effective They Are

The Last Letter From Your Lover: A Primer on the Book

Who Listens to Audiobooks?

8 hours ago
Leave a Reply